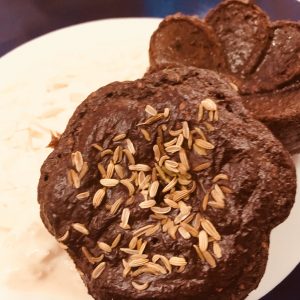 This recipe is seen widely on the web and often referred to as a mug cake, my adaptation of the recipe is basically the same but instead of microwaving for 3 mins, I find by baking it in a oven I am able to get a more cake like texture

1 TB sweetener or more/less to own taste

Whisk and pop batter into silicone baking forms I sprinkled with fennel seeds, bake approx 15 mins at in a pre heated oven at 180 deg